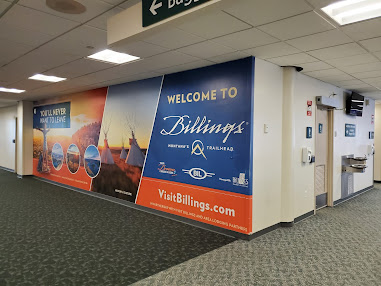 Ugh - yes, another race at altitude.

Colorado was rough, and Montana had it's moments as well. Billings is at about 3,123 feet altitude but the race starts a little higher up at about 3700 feet. It ends at about 3100 feet, with some minor hills along the way. I try to pick a small gradient downhill when running any race above 2500 feet, which is when I start to feel the change in altitude. I guess that's what you get living near sea level your whole life which is probably why I am a real big baby at altitude. I do that catch up breathing thing because I feel like I am out of breath - okay well, suffocating. Even though this race had no where near the ups and downs that the Prairie Dog Half in Colorado did, my pace still tanked on the minor uphills.

Billings is in the center of southern Montana, about a two-hour drive east from Bozeman. It was shaped by the Yellowstone River. Montana is beautiful. We explored some roads that Ron wants to go back and ride on his motorcycle.

Keep in mind, I am terrible at taking pictures! 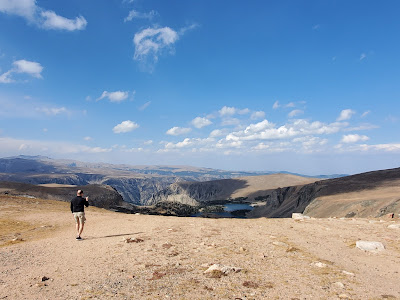 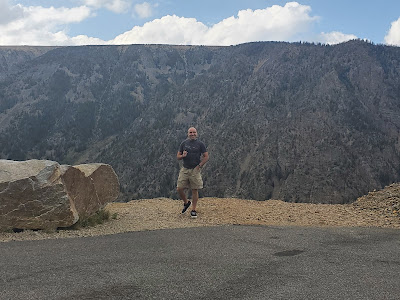 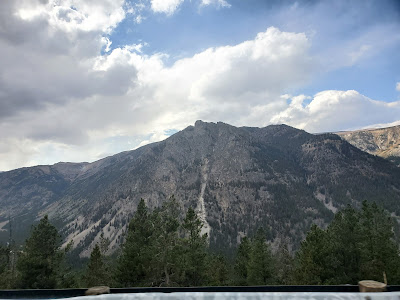 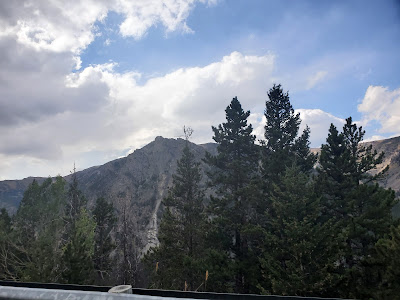 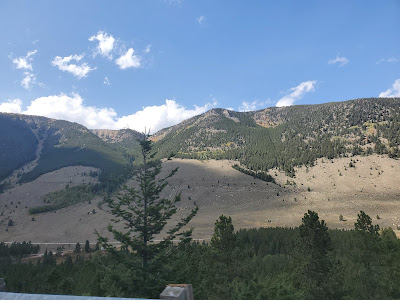 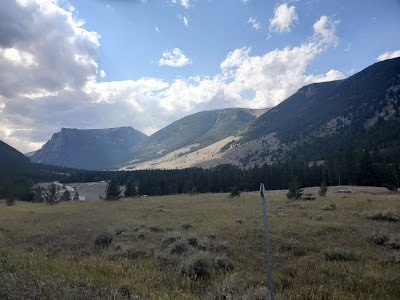 Billings is the largest city in Montana. It has great restaurants and brew pups. I picked up the race packet at the local YMCA. There was a map of all the races.

Even though the full marathon started in the tiny town of Molt, just outside Billings, the half marathon started at the midway point of the 26.2-mile full marathon course, on Molt Road. To get to the start, everyone packed into several different school buses. I took one of the earlier buses just in case I had tummy/Crohn's issues. I sat next to a gentleman who told me he had to go to work after he was done running. I thought, I know afterward, I am going to be super tired, and wondered what he did that he had to work on the weekend. So I asked, "What do you do?" He told me that he was a firefighter. I then said, "I bet firefighting out here is quite different than in New Jersey!"  He pointed to what I am guessing was a type of Mountain Sedge and said, "You see that stuff? It burns like nobody's business."

I learned a lot about Colorado, Montana and Wyoming over the past year. These are America's High Desserts. Each trip taken to these states, I have gotten a bloody nose. It's so very dry. The Montana Half wasn't only dry, at the start it was about 37 degrees F. The race start was delayed a little and everyone was huddling and shivering. I brought an old fleece, but put it in my checked bag not knowing the race start was going to be delayed a bit. It was very windy. I kept doing stride repeats. I met some women who seemed about my age. They were also running this half marathon as their "Montana Half". I met some women from Maryland who were also on track to finish a half in every state. I think the one woman was at state 47!
The start shot you down hill, which apparently was easier to run down this year than in the past because it is now paved. Ron heard some stories that people were falling and rolling down the hill at the start in years past. I am super glad it was paved - my luck I would have been one of the runners rolling down hill! LOL!
It was pretty quiet once the runners started off. No pace groups, no one to run with, just the sound of my breath. My cold arms and legs were looking forward to warming up. There were some people along the stretch of farm road shouting and cheering. I remember running through a little development with people cheering, "Great job!" Then more stretch of quiet. Like you see in the above pictures. Then I remember running past a farm. There were, what seemed like a bunch of goats or sheep. Okay, don't judge - one, I can't see that well because of the double eye surgery, but more importantly, I grew up with the NYC Skyline basically down my street, so my interaction with animals amounts to cats, dogs, squirrels, birds, etc.
I get excited when I see a chipmunk!
Anyway, we runners had some new fans! A bunch of baby sheep or goats came running down a dirt path toward the road,. They were bleeting and baa-ing. I started laughing and said out loud,
"Oh my gosh, this is the best fan club ever."
I don't think anyone else was as impressed as I was, but these little noises/cheers and little gallops made this race, at that quiet moment, beautiful! It was an incredible moment. I was racing on a road so different than any road I run on at home. That's what it's all about though, isn't it?
After winding through the city along several twists and turns, the race heads east toward the finish line at Daylis Stadium, near Billings’ Pioneer Park.
I pushed it out, kicking with everything i had left to trim off any last seconds.
Chip Time: 1:49:31
Yes! I came in under 1:50!
I placed 2nd in my age group!
Woo-hoo!
Time to take a hot shower, get a burger and enjoy Billings, Montana's beer trail!

Posted by Half Crazed Runner at 4:42 PM No comments: