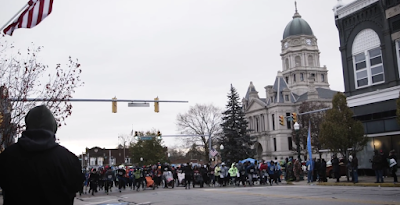 This post has been a long time coming! I ran my half in Indiana in November. It was very cold! It can take me awhile to warm up when it's cold - and I didn't feel warm until about 10-miles in. At the 10-mile point, there was a water stop. I remember taking out the extra hand warmers in my pockets and tossing then to a young female volunteer, who looked as if she were freezing!

I chose the Veteran's Half Marathon in Columbus City, Indiana because the race honors all who served in the armed forces. Freedom is NOT Free. Honestly, there's just not enough road to say; "Thank you!". It was the 11th anniversary of the Veterans Marathon, Half Marathon & 5K. Ron also fulfilled as he likes to say " his contractual obligations" and ran the 5K!
At the start of the run, there were several veterans who came out to stand at attention while one person played taps in front of the huge flag displayed in the middle of the town. I started to cry. It was very moving. I felt blessed to be experiencing this example of patriotism. Then, they played our National Anthem and as they say, "we were off." 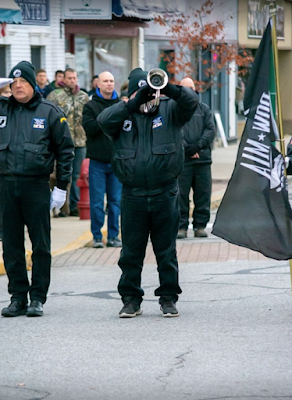 During the race, I was slightly ahead of a pack of runners who were running the marathon. The one gentleman was running with some sort of speaker, IDK what he was carrying - but it was playing classic rock songs. At first, my goal was to run away from them.  Then, I guess my pace slowed. Next thing I knew, I was next talking with them, laughing and hanging with them through the rolling hills. They were super nice.

The gentleman with the speaker was asking me all about why I came all the way from New Jersey to run in their local race. Of course, I told them how it all started, what it evolved into and where it was going. I would lose them on the uphill, then catch them on the downhill. It was nice running alongside great people full of energy. I felt every foot hitting the road - while it seemed they just glided by.

The cold and wind started to take away some of my energy. Next thing I knew, I was trying to keep up with them. They were about 100 meters ahead of me when I crossed the finish. I couldn't imagine running another 13.1-miles at that point! I'm sure they finished their marathon strong!
Right after the race, we went to the local brew pub. Ya' just gotta celebrate with a cold beer after a freezing cold half marathon at like 10AM, right? At first, it was Ron and me. Then, we met a local business person - he was a Psychiatrist. He came with us to the local brew pub. Then, after going up to the bar, we asked another person who was sitting by himself eating soup at the bar to come and join us. Next thing we knew - there were two other gentleman who joined us all. We were having a great time sitting around this large table, just talking. It was so much fun, we lost track of time. When we finally left, the runners were gone. We went up to the last few volunteers and looked to see what place I came in for my age group. I finished first place at 1:53:33 in my new age category, 55-59!


I have to admit, over the past few years, it's been getting harder and harder to pack up, fly to another state and run a half marathon in a city that I know nothing about regarding the terrain, typical weather or where to get food. This race had a little extra drama -  we missed our connecting flight!

We flew into Detroit. We walked to the gate - I thought we were too early. Based on this, we went to the Delta Sky Club. We were so tired from getting up at 4AM to fly out of Newark that we lost track of time. We ran to the gate just as the doors close! The gate attendants were like, "Didn't you hear us calling you?" Oh boy....

We rented a car and drove from Detroit to Columbus City, Indiana. We stopped on the way at a newly opened BBQ restaurant. Yes, I was taking a huge chance with my stomach, but we were starving!!! I just remember the young female business owner handing me Ron's "Soda Pop". LOL! I felt as if I stepped back in time - nope, just a few states over!

Yes, I had my digestive enzymes, probiotics, Pentassa and Diphenoxylate-Atropine!

The Veterans Half Marathon was cold and windy, but it was well-organized - and not too hilly! There was warm soup at the end for all runners.

Someone told me they changed the course because the wind was tripping people and they were falling down in one section of the race. It was pretty windy, so I couldn't imagine it worse than it already was. The best part was starting and finishing downtown in front of Whitley County Courthouse and running past that huge flag on Veterans Day! 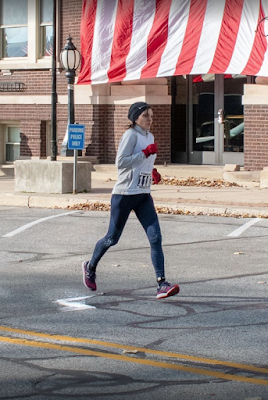 Train Hard!
Run Happy!
Run To Inspire!
And
Thank You to All Our American Veterans!💗
Posted by Half Crazed Runner at 4:39 PM No comments:

Promote Your Page Too

Promote Your Page Too

Chipping Away: One state at a time: Fifty States Half Marathon Club

It's not the destination, it's the journey.