On July 16th, 2021, about 20 months after my last half marathon, I ran the Prairie Dog Half in Castle Rock, Colorado. It was a very challenging course. It was also very hot.

My heart is heavy writing this post because as I reached mile 10-ish, I was told there was an emergency on the course. All runners were to be re-directed. I stopped and yelled, "Everyone pray!" Then I looked at the woman, who definitely had panic in her eyes, and said, "I am from New Jersey, I don't know where I am going." She told me to follow the other runners.

There was one younger girl in front of me who kept stopping. I would catch up to her and yell, "C'mon - you are strong, powerful and confident!" She would then start running again. She would stop, I would catch her and yell, "C'mon, girl. Let's Go." This went on for at least 4 to 5 miles. So, if I could catch back up with her and not lose her, I would not get lost  .... like I did in Washington State ... the first time I ran there! Ugh!

Maybe it's a good thing we were redirected straight up a hill because the young girl slowed, stopped and I caught up to her, again. I might not be fast, but I definitely had endurance to make it up that huge hill at the end! I tried to hang with her once she picked back up and ran towards the finish.

It wasn't until a few weeks after the race, the race director reported that a young man in the race passed away. This is very sad news. I tried to see if the family had a Go Fund Me page but the race director was not aware of any. I am praying for this family. This is a tragic loss and I can definitely relate to seeing a loved one off in the morning and hear that they will not be coming home. This is why I run. 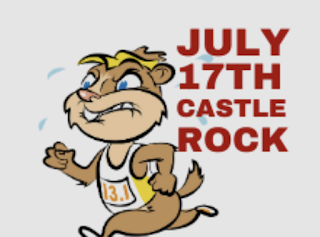 The race started at 6:30 AM, which is probably the earliest start that I have ever done. At about mile 6/7, I got really dizzy from the altitude and fell off the course pathway. I stumbled onto the grass and to the next water stop. The volunteers asked if I were okay. I just said that I was a little dizzy because I was not accustomed to running at such high altitudes. Fortunately, the race was pretty much downhill from there and I started to peel off some time. This is when I was passed by a young girl who said, "Wow, you have been so hard to catch!" I told her that as long as she was not over 50, I was okay being passed by her. She yelled back to me, "Noooo, I am only eighteen!" LOL!

The race was very pretty, most of it along a paved path, very quiet although you heard the occasional car and truck whiz by on the nearby highway. There were plenty of water stops and plenty of volunteers. There was one thing that I thought was odd and that had to do with the fact that there was no race timing mat at the turn around. After what happened to me in Kentucky when someone feigned running the full half and claimed to place in my age group, I am a fan of the bib chip and timing mats at start, mid-way and finish.

Although the race wasn't cup-less, which seems to be very popular in Colorado, it was a cup-less finish. Thank goodness we had some ice pops. I probably felt dizzy for at least another hour, which is why when they called my name and told me that I finished 2nd place in my age group, I sat down to take the pic:

Congratulations to Ron, who placed 3rd AG in the "obligatory" 5K

Well, only 10 more states to go!! A little slower than when I started 11 years ago, but as I tell my clients:

You can only do what you can do

for who you are

this moment in time! 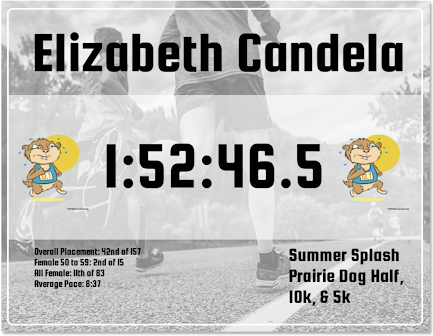 Posted by Half Crazed Runner at 2:30 PM

Welcome back to Blogland.
Congrats on your podium and the very good finishing time despite the scary elevation map!
Sorry for the runner, now he is running in heaven!
Now in Italy we are under another heat wave and I make my workouts at 06:30 a.m. like the start of your half.

Hi my friend! Thank you for your comment. Glad to see you are well! It has been quite some time. Italy is so beautiful! Enjoy! Salute!

It's not the destination, it's the journey