On August 14, 2021, I ran the Cheesehead Run Half Marathon! The race follows along the rolling hills of Calumet County in rural eastern Wisconsin. It was a very well-organized out and back that started in a small mid-western town called Hillbert, Wisconsin. Although the race mentioned some long uphill stretches, it was to me a nice flat course with a few miles on a trail, called the Fox River Trail. I was grateful for the trail because as the race proceeded, the sun felt quite strong.

In spite of being lactose intolerant, I thought this race would provide me with a great opportunity to experience the beauty of this quiet area of Wisconsin, nestled amongst lots of farms and corn fields. I was good though - no cheese curds for me, even though I think I saw them in the Appie section on every menu in every restaurant.

In spite of eating healthy and watching my diet, I had terrible pain in the upper right abdominal quadrant that lasted about 10-miles. August seems to always be a hard month for me in terms of managing my Crohn's Disease. I literally prayed the pain would go away for almost the entire race.

The whole time I ran, I thought, follow the guy in the bright yellow shirt. He past me in the beginning and from behind, he looked as if he were in such great shape. I though, gosh, if I can just tag along behind him for the rest of the race, I would probably do really well. There was no pic of me finishing, but here is the gentleman that I followed for the entire race.

When I finished, I had to introduce myself and tell him that I aimed to keep up with him the whole entire time. He was so nice - very thankful for all my compliments. I was like "WOW, I can't believe I was able to hang - he looks like quite the athlete!" Then he broke it to me... He told me that he loves to work out but didn't really train for this race - just ran a few miles here and there .... Let's get a beer, Brianth - maybe I will just forget that you just ran a few miles here and there with that post run beer! LOL! Of course, I train CONSTANTLY!

We have to give Ron some kudos - he ran the 5k! Great job, Ron, come have a beer with us! LOL!

It was great to learn that I placed first in my age group. This time, I was aware of where they were calling the age group winners - unlike Colorado. In Colorado all I could think was that I going to pass out from being deprived of oxygen for about 2-hours. In Colorado when they called my name, I was running around aimlessly wondering where the "winners circle" was - it was right in front of me. Oh, well.

I received a beautiful pint glass and, I kid you not, a block of cheese! At first I didn't know what was in the pint glass. I poked this yellow block wrapped in plastic - see a trend? I am a little slow after a race, a little glucose deprived. Then I realized and said out loud, "Oh my gosh, this is a block of cheese!" The commentator said, "Yes, it is!"

Next stop, a drive to T. Bacon's BBQ (don't get really good BBQ in New Jersey by me) and Anduzzi's Sports Club by Green Bay Packer's Lambeau Field. There was a pre-season game and the streets were packed. No we didn't wear any Green Bay jerseys - but we did happen to make friends with some Vikings fans from Minnesota, who were wearing inconspicuous purple outfits. They knew we were "visitors" based on our not representing Green Bay. I guess we stood out like sore thumbs - or in my case, sore hammies, LOL!

Here's a bit of the countryside along the way ...

Can't forget to include a picture of Freedom - this is the whole reason I am able to run throughout the 50 United States of America! I am, and have always been acutely aware of how very blessed my family and I are to be living in the USA. Our freedom is something I will fight to preserve! 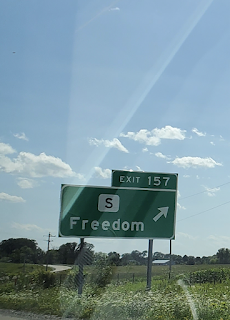 Posted by Half Crazed Runner at 4:00 PM